And yep, I am still using redux, even though react hooks, which supposedly made redux obsolete and old-fashioned, arrived back in 2018 (which is also the same year I started doing frontend programming).

In fact I’m using basically the same stack as when I doing started programming frontend in 2018, i.e. react, react-router, redux, saga and axios, but I’m using that stack very differently.

And for the record: I am using hooks a lot. I’m not completely retro. I just don’t use useState() or useEffect() much.

The main reason that I’m still using redux, can be summed up in the two words “redux devtool“.

There are actually other nice properties with redux, but without this devtool, I don’t think I would have bothered. Some of these properties, are:

I have used many model/view GUI concepts over the years, but react/redux is by far the one that has worked best.

I mentioned earlier, that I am using the same stack as in 2018, but using it differently. And the places where I’m now using the react, react-router, redux, saga and axios stack differently, are:

As I said, my main reason for still be using redux, is the redux devtool. This devtool exists for firefox, edge and chrome, and in chrome, it looks like this: 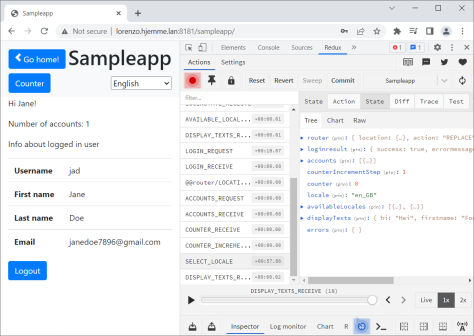 The screenshot shows the redux devtool occupying the right half of the browser window, with the application being debugged using the left half.

It is possible to go up and down in that list, and examine the redux store state at any given point in time, as well as looking at the diff of the state between the previous action and the current selection, and also look at what the payload looks like. This makes it easy to pinpoint what action modifies the examined value and why it is changed.

And since I now follow a pattern where each redux action source gets its own action (not “reusing” actions that happen to have the same payload and end up in the same reducers), it is easy to see where the data that changed the redux state originated from.

One reason I have heard people give for abandoning redux, is that there is “too much seremony”, too much code in too many files that needs to be changed when making changes to the datamodel.

And I agree with that. Especially using connect() with mapStateToProps() and mapDispatchToProps() is cryptic. And with a deep and nested redux structure the mapStateToProps() functions become complicated and fragile and a hard-to-debug point of failure.

Even with a flat redux structure and a simple mapStateToProps(), if I add a redux store state variable to a component that already has a long list of redux state variables, I typically need to make the addition three places

Since this becomes messy with just three variables, imagine what it looks like with 15 variables, all with similar names.

Also filling up the props list with a similar number of dispatch functions, to set the values, in redux state, doesn’t help readability and maintainability, either.

Luckily, thanks to the existance of redux hooks, this can now be made far more compact and readable:

Also this approach makes it simple to convert to useState() hooks if that is to be desired, or to go from useState() to redux.

The other place where I myself, initially had a lot of complicated code, were the reducers.

This was partly because of the deep nested data model used in the redux store (i.e. the same thing that complicated the mapStateToProps() functions), but also because writing reducers as switch statements where cumbersome and fragile (don’t ever forget to always return state on unchanged state!).

But redux-toolkit has simplified creating reducers (and redux actions) considerably.

Where an “old style reducer” would look something like this:

in redux-toolkit style reducers, I first define constants for each action like this, using the createAction() function:

and then I create separate reducers for each primitive value, using the createReducer() function, i.e. one reducer for foo:

and another reducer for bar:

The first thing to note is that the default switch, returning the state, isn’t necessary to specify, because the correct default behaviour is set up in the reducer created by the createReducer() function.

It’s possible to have a redux-toolkit reducer storing values in an object like what’s done in the old-style reducer example. But it doesn’t require much experimentation to see that splitting things into primitive values in the reducers gives the simplest and most predictable behaviour.

It is simpler to handle empty values, there is no problems with react components not being re-rendered, and no problem getting excessive rerendering because the parent object has changed, but the individual values haven (i.e. no need for memoization for performance reasons), and it’s easy to see that variables have the correct type in the redux devtool (less incentive to use something like typescript).

It is also simpler to keep reducers as compact one-liners, because the reducers have less work to do. Most of my reducer action handlers just replace the current state with action.payload.

The actions created by the createAction() function serves both as action selectors in the reducer, and as constructor functions in the dispatch methods, e.g. like this:

The FOO_FIELD_MODIFIED(e.target.value) function will return an object like this:

When I write a webapp, my mental model and mindset is “create a website”, rather than “emulate a thick client GUI”.

Because of this, I’ve adopted react-router and its way of thinking, in that different components are represented by different local paths in the URL, and that the URL changes as you navigate between react components, and that its possible to reload the URL and be able to return to that component in a meaningful state.

This means that there will be actions in redux when you navigate in the react-router, by whatever means.

And this means that you can navigate in your appliation by firing redux action.

I take advantage of both:

The people behind react-router don’t like redux much, but I wouldn’t like to be without connecting the two. And I think they are focusing on the wrong thing in their criticism: the react-router redux connection, for me, is not about having the router state in the redux store state. It is about using redux actions to signal, and initiate, navigation.

When I initially started using react and redux, sagas were only used for asynchronous REST communication. And that worked especially well in combination with redux’s “redraw when is updated” behaviour.

I tried doing REST requests without involving redux in one of my projects, but I found that I missed the asynchronous “fire and forget” behaviour of just triggering load and then not concerning myself with what was happening, so I ended up putting sagas back.

But now I’m using sagas for something else, which is logic that involves more than one redux value.

If you wish to create a library of high level react components and you wish to encapsulate a lot of behaviour inside the components, then you probably should use useState() instead of redux.

Personally I’m thinking that creating such a library probably isn’t a great idea, because in my experience one often thinks one wants the same behaviour in different places, but there are always subtle differences that needs adjustments and configuration and changes, and the encapsulated the components are, the harder they will be to fit everywhere.

I have heard some people say that you should use redux on large applications and useState() on small applications, but that have never made sense to me. It makes sense to me to use redux with react, and the size of the application really doesn’t matter.

The place where I’m currently is using useState() is in login dialogs. The fact that username and password aren’t stored in the redux store is actually a feature here.

I tried out a hybrid approach of storing intermediate values with useState(), to avoid spamming the action stream with small edit actions. That worked fine until I wanted to reset the form. I was told “you need to use useEffect() for that”, i.e. not so easy. So I dropped the hybrid attempt and went back to pure redux.

So in conclusion: thanks to the existence of redux-toolkit and redux hooks, redux is much simpler to use today than its reputation would indicate, and has a real nice debugging tool.

This site uses Akismet to reduce spam. Learn how your comment data is processed.

On Emacs, eclipse, and other things that take my fancy