Except for work computers with GNU/linux, the last of which was retired in 2008, my GNU/linux computers have been outdated hand-me-downs. And when the P4 I got back in 2010 went belly up, I figured it was time for trying a modern machine.

Note: I wasn’t going for a top-of-the-line gaming computer with high performance everything. Just a modern state of the art computer.

I wasn’t satisfied with the combination of price and specs on the desktop computers sold by the consumer electronic retailers, so I asked an old colleague who likes building his own computers (thanks Alexey!) to help me come up with an order for components that would work when I put it together. This is what I ordered:

I won’t spend much time on the task of putting the parts together to make a working computer, suffice to say that with re-watching this video, frequent phone calls to Alexey, compared with close reading of the documentation (Alexey told me to do that), I got it working and was greeted by the fancy screen that has taken the place of the BIOS. 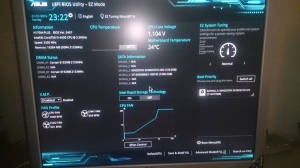 In the boot menu, I selected

and then pressed ENTER.

In the debian installer:

That’s it basically. Things seems to work out of the box, sound, video etc. (youtube doesn’t play in chromium, but it does play in firefox).

This site uses Akismet to reduce spam. Learn how your comment data is processed.

On Emacs, eclipse, and other things that take my fancy